Travelogue of a Lenten Pilgrimage

I joined a group of 100 parishioners from Good Shepherd Parish, Sanpada on a cool and beautiful morning on 12th April 2014 for the annual Lenten tour. The plan was to dedicate an entire day to the Stations of the Cross and make then in 14 different churches across South Mumbai.
We set out at 8.00 am from Sanpada with a prayer on our lips, a hymn in our hearts and the Lord’s cool wind in our hair.

Established by Capuchin Fathers in 1897.  This church was built primarily for the Koli community living in the neighbourhood.  In this small but beautiful Gothic church, we contemplated on how Jesus accepted his Father’s will to sacrifice himself for all of mankind. Fr. Terrence D Souza, blessed the visiting congregation and inspired us with his talk on the choice of two different life paths – One of Care, Non violence and Compassion and the other of Control, Conflict and Indifference. I examined myself for the humility, patience and love to accept my cross without complaint.

Dominated by the crucified Jesus and flanked by Mother Mary and the apostle John, the church like it’s namesake had a humble and honest personality.  In it’s humane atmosphere, we contemplated on how Jesus took upon himself the crushing weight of the sins of all humanity as he took up his cross. I examined the depth of my gratitude and love for Jesus as he took up the heavy burden.

This century old church is also the seat of the Archbishop of Mumbai. The church is resplendent with graceful arches, vibrant frescos, life-like statues and a dignified high alter. In its awe-inspiring premises we were reminded of God’s glory and his Son biting the dust to uphold his Father’s glory in his dearest creation – Man. We remembered the weak in our society who fall and yet know no respite from their suffering and are roughly hauled up again to carry on.

Set up in 1853, this was the first church for British military (Roman Catholics) in the cantonment. In it’s hallows in front of the striking white altar, fed with sunlight, bathing the church in a stunning glow, we meditated on the mother and son who had put their entire trust on God. “Look how God repaid us”, they could have said. But even in this phase they trusted God and obeyed his will drawing strength from each other. I remembered my own complaints and resolved to trust the Father.

5th station - Simon helps Jesus carry his cross
Open Alter at Cross Maidan
An open alter with no doors, windows or walls and Christ’s crucified hands inviting all of humanity to celebrate his Father’s creation. Under the open sky we contemplated on Jesus’ helplessness at his inability to carry the cross alone and was in despair when no help was offered voluntarily but was pushed on him in the person of Simon. I examined my willingness to reach out to the marginalised and my frustration at not being able to fulfil my duties.

How fitting it was that we made this station which features an act of kindness at this small but beautiful church in the hustle of Marine Lines. Our Lady of Dolurs Church was like a balm to the weary traveller, just as Veronica’s kindness was to the suffering Jesus.  Have we the strength to be kind to the dregs of humanity I asked myself? I examined my humility and strength to follow Veronica’s example.

On this historic site, we turned over the page where Jesus stared at his weakness at falling even while getting help. When one is so weak that even his will can carry him no more.

In the adjoining St. Sebastian Goan school, the weary pilgrims received a sumptuous meal and were refreshed for their next station. 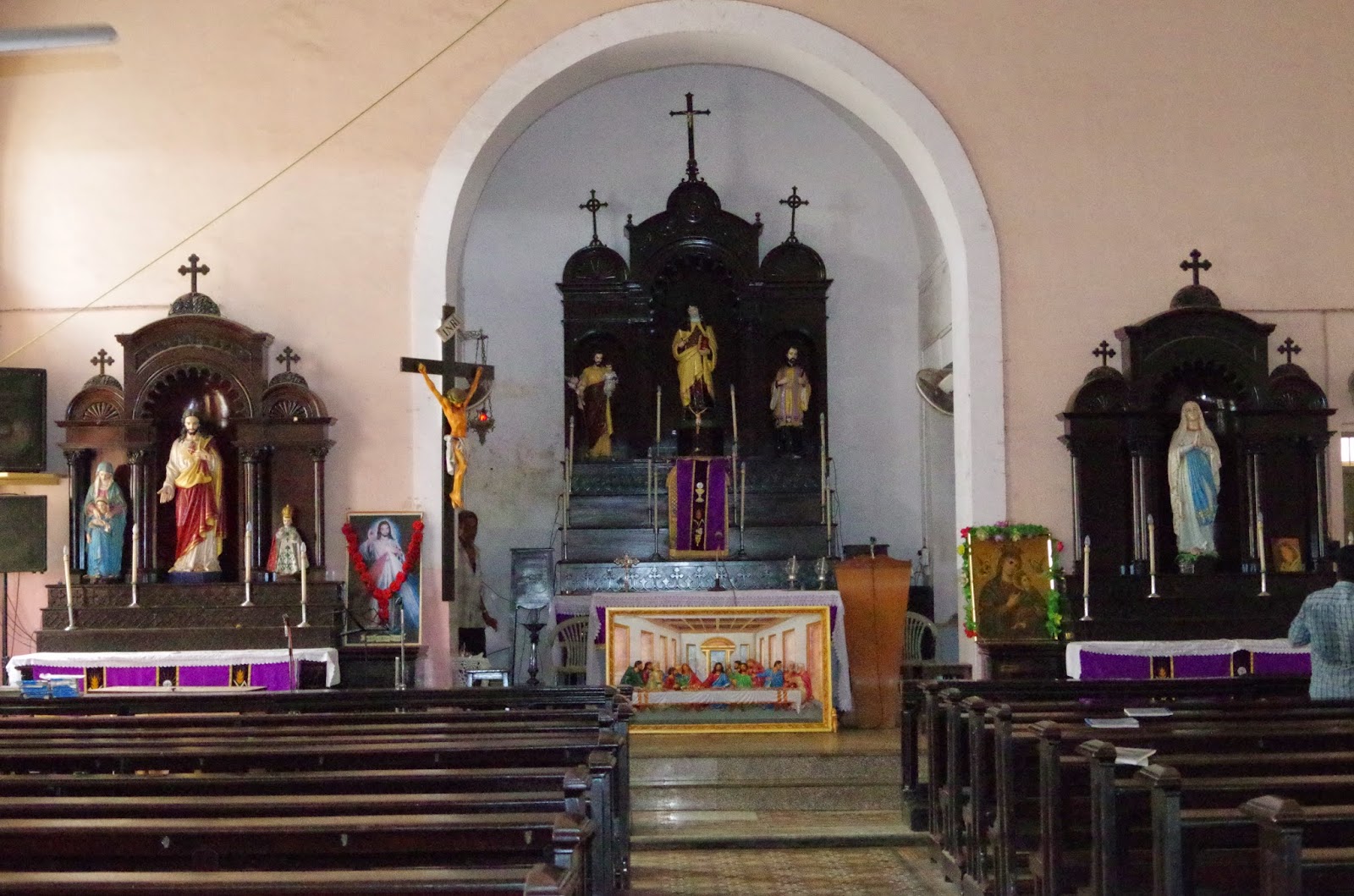 The central figure of St Theresa is flanked by St. Joseph and another saint. The alter features a beautiful Last Supper painting. The figures of Jesus and Mary dominate the area before the pews. An otherwise stark church; it inspires its people to examine their purity and to be humble like St. Theresa. At this station Jesus gives a message to all women, “Weep not for me but for your children”.

In this Spartan church build in a semicircle design with a stained glass painting of the risen saviour raising his hand to bless the people, we contemplated on the suffering, broken Jesus, on his knees for the third time. Is this the Son of God? Strength shines through not in his ability to repel but to withstand. Life is so, sometimes it requires us to snap back sometimes to bend. When love is the force, the outcome is God’s will.

Dedicated on 1st Jan 1913, the church was initially run by the Jesuit fathers and was later handed over to the Diocesans fathers.  In this beautiful Romanesque church with it’s beautifully painted dome depicting the Last Supper and stained glass painting of the Sacred Heart of Jesus above the main entrance we contemplated on how Jesus’ humble adornments were shorn away from him. What does it mean to be defiled in our body in which we take so much pride in. We reflected on what Jesus willingly gave away to save us.

The 11th station – Jesus is nailed to the cross
Our Lady of Glories Church, Byculla, also known as Gloria church.

Originally built in 1572 and later reconstructed at its current location in the shape of a Latin cross in 1913, Gloria Church exhibits Gothic style architecture. Under its 160 ft steeples, beautiful altars, divine statues and colourful stained glass windows, we reflected on how Jesus, weak and humiliated was nailed on the cross. How mighty is God and yet he joined the lowest ranks to take us out of our sinful selves.  It is this mightiness that I aspire to be joined to. A mightiness built on love and compassion which, every sin against it’s source pulls me away from.

Our parishioners Mr. Vincent and Mrs Alzira Rocha got married in this church. This beautiful church was once a private chapel and was later extended to a church. It is 130 years old. We looked up to the crucified Christ along with St. Anne and Mother Mary and made our 12th station. The small high vaulted church infuses one with a feeling of lightness and beauty, an opportunity to soar and reach the skies. We contemplated on the suffering, broken Jesus. All our hopes pinned on the sacrificial lamb. When will I be able to stand up and take the responsibility for my own sins instead of looking for sacrificial lambs. And yet, this lamb opens its arms wide to invite the sinful.

The 13th station  - Jesus is taken down from the cross
St. Josephs’s Church, Umarkhadi.

A beautiful church with a alter backdrop of Jesus’ foster father Joseph carrying Jesus in his hands and a dome with two angels supporting the crucified Jesus against a glorious sun; we were reminded of our Father, both worldly and spiritual. Jesus, the obedient son was dear to both. With his ultimate sacrifice, the son glorified his Father and left a legacy for us to carry on.

The 14th station – Jesus is laid in the tomb
Our Lady of the Rosary Church, Dock Yard Road.

We made our last station in the bosom of our Lady. Built in 1794, the church has a warm, comforting, familial atmosphere. Believers are welcomed by the heartening sight of the outstretched hands of Our Lady welcoming them into her Son’s church. The same hands which had held her dead son in her arms. A son who had died for us. In this church, we contemplated on how the few people who had the courage to stand by even at his death, did not leave Jesus to the birds but laid him with dignity in a tomb. Jesus showed us that Death is not an end. It is but a transition where our true self, devoid of its physical shell returns to the Father.

Thus it was with hope that we returned. Not with dread of death but with hopes of a glorious reunion with the Father.
Posted by Unknown at 04:00 No comments: 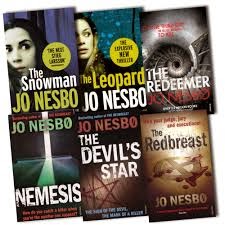 Last time I wrote on this blog was last year..... I read daughters of war and didn't get to writing the review.
Jo Nesbo, Gillian Flynn, Keigo Higashino, Jussi Adler-Olsen to name a few had set my pulse racing.
Cud'nt put down till the last page, cud'nt wait to open another book.
The adrenalin rush these thrillers give is addictive. And this is my purgerance. To write about and get them out of my system.
Why is human frailty so hard to not observe?

Jo Nesbo is being touted as the next Stieg Larsson of the “Girl with the Dragon Tattoo” fame. As gripping as his tales are, he still has some catching up to do in the dexterity and twists in his tales. Especially at his closures, Nesbo tends to spill the beans in the 2nd last chapter itself. He laboriously explains the entire sequence of events and leaves nothing to the reader’s imagination. Most stories have a second sub plot running in parallel. While this does confuse the investigation and the reader, one gets used to this after the first couple of reads.

Then why did I rate it “Very Good”?
Fascinating plots, twisted insights into human behavior, thousands of motives for who dunnit and a tragic love story.

Nesbo delves into the criminal’s mind with compassion. A realm I'm personally uncomfortable with because I want to judge this person, not get into the whys and whatfors. Delving into his motives, one realizes the criminal is also human. Yes, the outcome of his actions is one which is unacceptable but one wonders whether this man/ woman deserves sympathy or punishment!

Jo Nesbo  works with certain beliefs about serial killers – that they take to this extreme form of punishment on society to feel normal about themselves. In so many ways an individual may feels isolated, humiliated, barred. But where is the tipping point?
To what extent do these societal norms contain human bestiality and where does it cause it to spill over? Should all behaviors to be considered normal? So that no fringes are caused to spill and turn into beasts? Or should such divergents be expelled and kept separate from a society that follows its norms? When we imprison our criminals we are doing just this. Formerly no one bothered to probe into the question why. Those who knew kept quiet.

So who is the criminal?
A Government which authorizes carpet bombing of an entire city or a survivor who comes into the former’s gardens and kills its civilians?
Parents who humiliate their child on discovering his/her aberrant sexual behavior or the grown up child who rapes and silences at will?
The police officer who takes law into his hands to punish criminals who would otherwise escape the law or the lawmakers who make lenient rules and give multiple chances to correct.

The world is changing. A person is no longer the inhabitant of a village or a city. We are all global citizens and expose ourselves to global trends and perspectives.

Stage one is done. We were brave enough to open ourselves to the onslaught of different cultures, religions, philosophies, rights and wrongs ... Now are we strong enough to withstand it?
Posted by Unknown at 23:08 No comments: